It took us, the people of the former Yugoslavia, a quarter of a century to re-examine the July 1995 genocide in Srebrenica. The older generation that endured the 1991-1995 wars would rather forget them, while, for those growing up since they ended, these wars are as distant as WWII is for my generation. But they would be mistaken for thinking that the past does not influence their life today.  You only need to see just one film, Quo Vadis, Aida? by Jasmila Žbanić, to understand.

Born in 1974, Žbanić is old enough to remember surviving the siege of Sarajevo as a young girl. ‘I was 17 when it started, and at first we didn’t even understand this was war. We were convinced that in Yugoslavia, and especially Bosnia, war could never happen because it was so intermixed’, as she explained in a 2021 Guardian interview.

She was also old enough to experience the shock at the news about the fall of Srebrenica, declared a UN safe area, and subsequent mass murder of some eight thousand unarmed Bosniak men by the Bosnian Serb army and paramilitary.” data-html=”TRUE” data-placement=”bottom” data-toggle=”popover” data-trigger=”manual” href=”#footnote-1″ id=”anchor-footnote-1″>1 Carried out under the orders of  general Ratko Mladić, who was later tried and indicted for genocide, crimes against humanity and additional war crimes at the International Criminal Tribunal for former Yugoslavia in The Hague, this atrocity marks one of the central moments of the war in Bosnia and Herzegovina. The atrocity also reflects exactly what the war was about – a struggle for territory and changing borders through ethnic cleansing.

Confronting the past is not easy and nobody wants to do it unless there are forced to by programmatic decisions which impact all of society through education in history, politics and law. Indeed, when dealing with such traumas and their legacies in society, it is hard for people to really understand them, harder still to identify with them. Perhaps art offers a possible pathway, but it takes real talent to make it happen. Such an artist needs not only talent, but also the clarity of vision and personal bravery, not least because the entire region remains reluctant, if not directly opposed to confronting the past in search of truth. In spite of the official speeches with reconciliatory phrases, reconciliation itself exists, at least politically, in name only.

Successive post-war governments have invoked the memories of war to awaken nationalism in order to scapegoat others for their own failures, particularly during local elections or in times of domestic troubles. And because a profound reconciliation is unlikely to occur if it is not a part of a political programme, calls for reconciliation serve as a smokescreen, a fig leaf for the international community. In the meantime, locals in many communities are forced to live side by side with their former torturers, with neither hope for justice nor help in dealing with their pain. 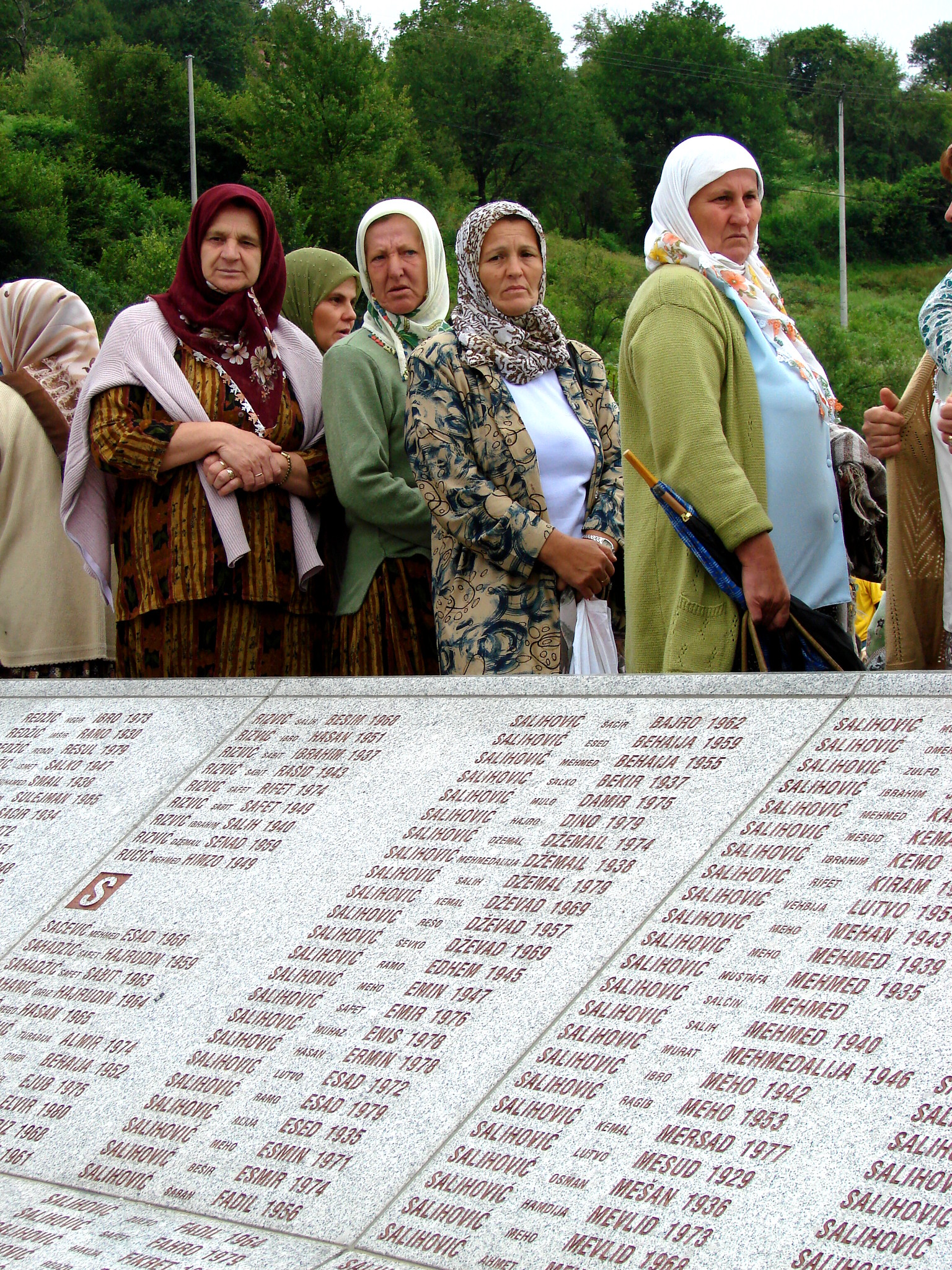 In the case of the Srebrenica massacre, it is indeed hard to make sense of how it happened without looking into it closely, almost microscopically, hour by hour as Žbanić does in her film. The facts are known. There are enough documents and even documentaries, thanks in part to the vanity of general Mladić, who enjoyed being filmed as he entered the town of Srebrenica, visited the refugees at the UN compound or negotiated with the Dutch commander. But to make a feature film that would avoid prejudice, nationalist ideology and sentimental kitsch while managing to relate the facts in all of their complexity is quite a feat. However, in Žbanić’s first film Grbavica, she did just that, telling the story of a single Bosniak mother and her teenage girl, who was conceived through rape in a Serbian prisoner camp, and her struggles when her daughter starts suspecting the truth. For her treatment of this sensitive topic, Žbanić won the 2016 Silver Bear at the Berlin International Film Festival, which helped launch her international career.

Making a film about war, Žbanić was aware of the tradition of war movies in the former Yugoslavia, of mass spectacles and the one-sidedness that characterize most of them. Our post-WWII generations grew up with so-called ‘partisan’ movies – ‘partisans’ being soldiers in the army that fought Germans under Josip Broz Tito, who went on to become the life-long president of Yugoslavia. ‘Partisans’ were good guys and heroes by definition. The heroic battles of Tito and his army against the mighty German army at Neretva or Sutjeska rivers, for example, were immortalized in many such films; some of them are even very good. But most of them were heavily tinted by communist doctrine. As school children growing up in the 1950s, my generation was rushed to the cinema by our teachers, where we were spellbound by the films. Later on we would play war – partisans and Germans instead of cops and robbers.

The film Quo Vadis, Aida? is inspired by a true story told by Hasan Nuhanović, a translator for the UN Dutch battalion in Srebrenica, in the book Under the UN Flag: The International Community and the Srebrenica Genocide. But Žbanić’s main character is female, a translator, a former teacher and mother of two grown-up sons. Her personal drama plays out when Mladić’s soldiers enter Srebrenica.

The situation becomes more and more chaotic by the moment. As the army enters the town, thousands run to the UN compound to seek refuge. A matter of life and death, Aida manages to push both her sons and her husband into the compound, unlike tens of thousands who remain on the other side of the fence. It is impossible for her to respect the principles the Dutch try to implement; all she cares about is saving her family. Soon, however, it becomes obvious that the safe zone is no longer safe. The Dutch battalion and its commander Thom Karremans have no manpower, arms or air support  (the entire UN chain of command is on summer vacation!) to keep Mladić out and guarantee the safety of the people. Their defeat, and the defeat of the UN policy is imminent, and gruesome when it comes.

As a teacher in a small community, Aida’s position is complicated still further. Because it was literally a war between neighbours, many people ask her for help, even some who are on the side of the enemy. Despite the film’s emotional pull, it never crosses over into sentimentality, horror or kitsch. Several powerful scenes particularly stand out. One is the mass execution of Bosniak men. They are first pushed into a big hall, then shot through the windows. We see neither executors nor victims; we hear only the sound of platoons and ensuing silence. 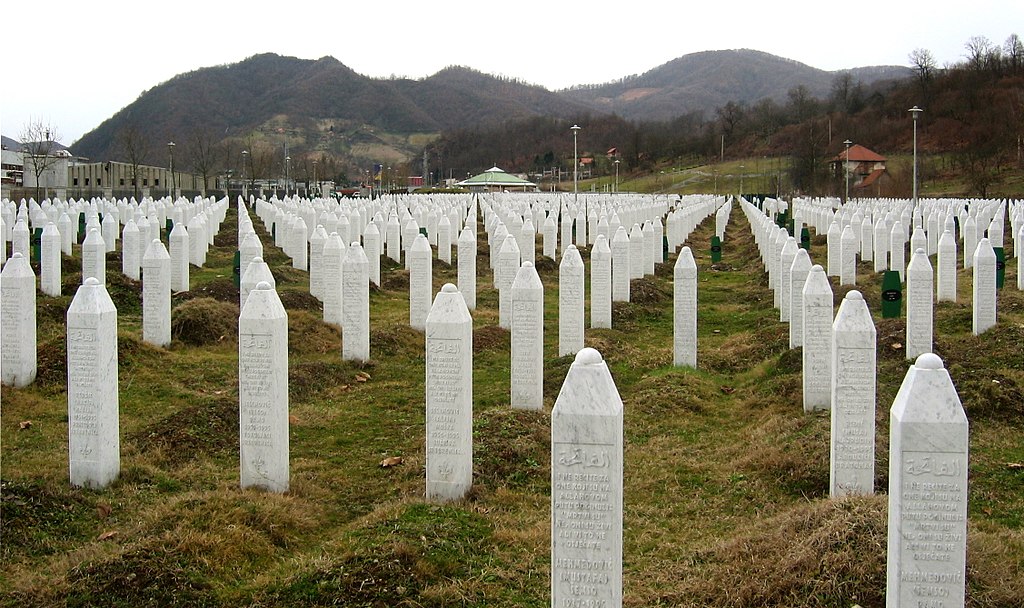 Gravestones at the Potočari genocide memorial near Srebrenica, photographed in 2009 by Michael Büker. CC BY-SA 3.0, via Wikimedia Commons.

Silence plays an important role in perhaps the most memorable scene of the entire film. After the war has ended, Aida searches for the remains of her sons and husband. In yet another hall, this one white and sterile looking with human remains neatly arranged on the floor, again her pain is marked by silence. The moment she recognizes one of them, she falls to the floor in mute grief, a Pietà of sorts, and the image remains with the viewer for a long time.

A return to normality?

However, the film does not end here but years after the war is over. Aida has returned to teaching. Supervising a school performance, while children are singing on the stage, she spots a particularly ruthless Serbian soldier in the audience. Together with his wife, he is enjoying the performance just like all of the other parents. Victims and perpetrators are forced to live together. Life goes on as before, or so it seems. Is this the picture of ‘normality’ or a seed of future confrontations? Is it possible to just forget and go on, as the past becomes only a hurdle to a ‘new life’? Žbanić is too good an artist to provide easy answers. Her task is to point to questions that, if not answered, will continue to surface, determining  the future of the very kids singing merrily on the stage. These are the children who are indifferent to the past today.

It is, of course, to be expected for such a film to be criticized both at home and in the region, often with contrary arguments. But Žbanić handled this big responsibility to the theme, the political environment and, above all, to the truth elegantly and with the respect of someone with outstanding talent. Perhaps it is interesting to notice her explicit feminism. Žbanić dedicated her film to ‘the women of Srebrenica and their 8,372 killed sons, fathers, husbands, brothers, cousins, neighbours’, as she mentioned in an interview. She continued:

‘As a woman, I can’t find anything enjoyable about war. It is a banal platform for sociopaths and people blinded by power. All human values get neglected, and only the strong can survive. As a feminist, I despise these structures. I find war full of banality and evil. So, the selection of my characters, my approach to visuals, camera, editing, every aspect of filmmaking is made from the feminist perspective.’

However, her feminist ideology does not dominate the film: anybody can identify with the women of Srebrenica through a shared human experience, because war attacks our very humanity. This is what we see here. While presenting us with history and tragedy, the film has the power to force us to look in the mirror.

Was it realistic to hope that Quo Vadis, Aida? would be an Academy Award-winning film? Žbanić knew that a film with such a heavy topic – the atrocities carried out in a forgotten war – could hardly get an award. But her award was the nomination itself. Being a nominee for an Oscar provided a unique opportunity to remind the world that thousands of  Bosniaks were executed in a war that many choose to downplay because it happened in a European country that reportedly was not really European. Only their death was real, and it all happened almost yesterday.

And what of the awareness of Srebrenica today? In a 2021 interview in The Guardian, Žbanić doubts it would change:

‘I’m afraid that if Srebrenica were happening at this very moment, the outcome would be the same. Europe is more disunited now, and rightwing forces more in evidence. If this were the constellation of political powers, no one would lift a finger to help the Bosnians – and this is what is scary. We say – never again, but there’s nothing behind our words. Bosnia is still considered “other” in Europe. I was at a gathering where the European Film Academy president said that there hadn’t been a war in Europe for 70 years, and all I could think was: “Were the 100,000 people who died in Bosnia non-European?” But we don’t count.’

Obviously, the film resonates more for us, people who live here, in Bosnia and Herzegovina, Serbia and Croatia. However, everybody should be able to see that war is not only what others are doing to us, but what we do to each other and that it won’t stop until we decide to end it on all levels and with all possible means. After watching it, it should be more difficult to turn our heads away from Aida.

That is art’s true power.

Get the best viral stories straight into your inbox!

What do you think?

© 2021 by bring the pixel. Remember to change this

Back to Top
Close

Hey Friend! Before You Go…

Get the best viral stories straight into your inbox before everyone else!

Don't miss out on new posts!